Although I tend to use emulation to record my Atari A to Z videos for the sake of convenience, when I actually want to sit down and play something on the Atari 8-bit or Atari ST, I prefer to use the original hardware.

There are myriad reasons for this, probably chief among them being that strange sense of nostalgia for things that used to be inconvenient, like disk loading times (and the noise of disk drives!), playing on a small CRT TV (or TV-monitor in my case, since we had — and I still have — a lovely Trinitron hybrid thing) and all those delightful compatibility issues we used to have to deal with.

There’s one aspect that can prove quite annoying, however, and that’s the tendency of old joysticks to fail. While games for many home computers of the ’80s offered keyboard control as an alternative, on Atari systems it was often joystick or nothing. So clearly the way was open for a company to put out a modern joystick that would work on an old system.

Enter Monster Joysticks, nothing to do with the energy drink brand. Based in sunny Watford in the depths of Hertfordshire, this company specialises in joystick kits particularly focused on retro and arcade gaming. To that end, I imagine much of their trade comes from their All-in-One range of joysticks designed specifically for use with Raspberry Pi, but a recent video by YouTuber and entertainer Stuart Ashen (aka “ashens”) made me aware of their retro offerings.

The Mini Monster, as the retro joysticks are called, are arcade sticks built to similar specifications as the All-in-One sticks, but instead of providing a convenient little space to slot a Raspberry Pi inside, they simply provide an interface through which you can connect to a 9-pin “Atari” connector on an old system.

Despite being known in the vernacular as Atari connectors thanks to their introduction with the Atari 2600, these 9-pin sockets can be found on a wide variety of computers and consoles from the ’80s and ’90s, including Atari 8-bit, Atari ST, Commodore 64, Commodore Amiga, ZX Spectrum (with an appropriate interface, since many Spectrums didn’t come with joystick ports fitted), Amstrad CPC, MSX, Sega Master System, Sega Mega Drive and plenty of others besides. This meant that there weren’t really many “device-specific” controllers around at the time; you could buy one controller and use it on a variety of different systems.

There were a couple of caveats, primarily with regard to the consoles that made use of these connectors. ’80s home computers tend to only support joysticks with a single button, while the Sega Master System (1985) had two buttons and the original Sega Mega Drive (1988) pad had four (including Start), later expanding to seven with the advent of Street Fighter II.

This means that while you can plug a Mega Drive controller into an Atari 2600 — and indeed many modern 2600 enthusiasts do this, as the controller’s squidgy D-pad works well with the format of 2600 games — if you plug an Atari 2600 joystick into a Mega Drive, you won’t be able to play some games that require more than one button input.

With this in mind, the two-button format of the Mini Monster means that you can use this on a Sega Master System as well as pretty much any ’80s computer, but the Mega Drive is probably out of the question. And on those single-button computers, that second button isn’t entirely useless, either — more on that in a moment.

The Mini Monster, like most of Monster Joysticks’ offerings, is provided to you as a kit rather than coming pre-assembled. There are two variations: the Basic and the Deluxe. The latter comes with higher quality Sanwa Denshi parts of the type used in high-end arcade sticks and arcade machines, but the functionality of both is identical. There are clear instructions available on the company’s website which also come as a printout with the kit, and for those who fear getting their hands a bit dirty/burned/sliced off with projects like this, no soldering is required — just a screwdriver. You can assemble it in left- or right-handed format, but making a left-handed stick means you don’t have the nice shiny side of the top shell visible — a minor issue, but worth noting nonetheless.

I must confess that since my Deluxe Mini Monster was a birthday present from my wife Andie, I didn’t assemble it myself, but I’m pretty confident even someone of my technical ineptitude would have been able to put this together without killing anyone and/or myself. Andie said that by far the trickiest bit was getting the protective plastic off the thing in the first place — while it peeled nicely off most of the shell without too much difficulty, the etched “Monster Joysticks” logo on the top tended to get a whole bunch of plastic crap caught in it, requiring a bit of careful scraping.

Once the joystick is assembled, you can connect it to the device of your choice using the port in the back. To do this, you’ll need a male-to-female 9-pin extension cable, one of which is provided with the kit. Unfortunately, the one I had with my kit wasn’t quite “right” somehow and kept popping off the port in the back of the stick, but as it happened I already had another one of these to use with those stupid under-console joystick ports on the later models of Atari ST, and this attached firmly and securely. I guess I was just unlucky with the one that came included with mine!

The male end of the extension cable goes in the port on the back of the stick, the female into your computer or console. There’s also a little switch on the back that controls what the second button does — it either acts as an actual second button (primarily for the Master System) or, and here’s the really delightful bit, it can map itself to “up” on the joystick, so all those really annoying platform games on old computers that require you to push “up” on the joystick to jump can now be played by hitting a button to jump instead! You do not understand how much of a difference this makes until you try it for yourself. Suddenly games that were borderline uncontrollable with a standard stick are much more playable, and this feature alone makes the Mini Monster worth the money.

The games I’ve tried the Mini Monster with so far (all on the ST for now) have all benefited immensely. Magicland Dizzy was much more playable with the second button set up for jumping, and Panic Dizzy’s frantic puzzle gameplay worked extremely well with the responsive clickiness of the Sanwa stick. 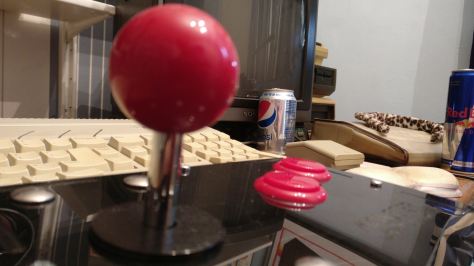 Firebird’s Savage played really nicely with the stick and jump button, feeling like a “proper” arcade game, and Elite’s Buggy Boy demonstrates an alternative application of the second button: an accelerator for driving games that require you to push up to speed up.

Domark’s Escape from the Planet of the Robot Monsters was an absolute delight with the arcade stick, feeling extremely authentic to the arcade machine — it’s just a shame that you can’t map the second button to a key on the keyboard, as it would be nice to be able to use the bombs in that game from the stick rather than having to hit the Shift key on the keyboard. This is impossible given the tech, however; it’s not using any custom drivers or anything, just the systems’ built-in 9-pin controller port handling, so there’s no way to interrupt the signal the stick is sending and convert it to a virtual keystroke. A pity.

The unit itself feels great whether you’re holding it on a flat surface like a standard arcade stick, or holding it in your lap like an old-school joystick — it’s small enough that the latter is an eminently practical and comfortable option. I can’t speak for the parts in the Basic model, but you can really feel the quality of the Sanwa parts in the Deluxe setup; this thing feels like it will stand up to a lot of punishment, and it’s wonderfully responsive while playing. I haven’t quite dared put it up to the “waggle test” with an old-school athletics game just yet, but I feel it will cope with it just fine.

In summary, if you happen to have any old 9-pin port systems lying around unused because all your joysticks are broken, the Mini Monster is a very worthy investment, particularly in its Deluxe incarnation. It really has made my old Atari computers feel new and fresh again, and the fact that it works on some old consoles such as the Master System is an added bonus.

This is a cross-post from my main site MoeGamer.net. Please stop by for a variety of coverage of overlooked and underappreciated games, new and old!