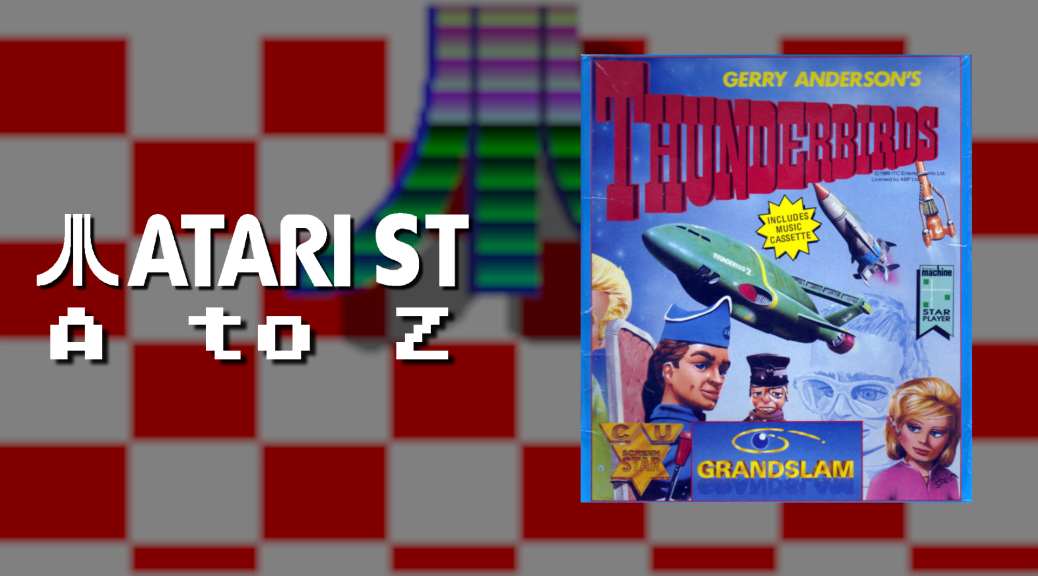 As we’ve previously talked about a few times, licensed games on 8- and 16-bit home computers tended to follow a particular formula.

That’s why when games like Thunderbirds came along and tried to do things a little different from the usual “platform game that doesn’t have much to do with the show or movie” approach, it was worth taking notice. Okay, so Thunderbirds in particular manages to create a lot of its own problems by taking this approach… but it’s got ambition, I’ll certainly give it that.

It’s also worth bearing in mind that when this was released, a lot of conventions that we take for granted in gaming today were still being established and figured out. At least, that’s what I kept telling myself as I had to restart that first mission over and over and over again…

Telecomsoft’s “Rainbird” label was known for putting out a variety of high-quality releases aimed at more “mature” gamers: things like adventure games, strategy games and simulations.

A popular set of games released under this label were the illustrated text adventures composed by Magnetic Scrolls — a range of games with a distinctly British sense of humour about them, along with some excellent writing, some well-crafted “feelies” in the packaging and, as usual for the genre, plenty of crazy puzzles to figure out.

One such example is Jinxter, a game which challenges you to deal with the fact the world is suffering a bit of a spate of… wossname… bad luck.

Horror games really took off with the advent of the “survival horror” subgenre that Alone in the Dark and Resident Evil introduced in the late ’90s.

That’s not to say that there were no horror games prior to that, however. And one of the most creepy, disturbing and unsettling of them all was Uninvited by Icom Simulations.

Uninvited was one of Icom’s “MacVentures” series of point-and-click games, but it was ported to numerous platforms after it proved popular on its original platform. One of those was Atari ST, so here we are… This one’s a cool addition to the Atari Flashback Classics collection: a “lost” game from the Atari archives.

Maze Invaders sadly never saw an official release either as an arcade machine or a home port, languishing in the archives until recently. The International Centre for the History of Electronic Games managed to acquire a whole bunch of old Atari goodies back in 2014, and part of that heap of fun times was Maze Invaders.

It’s kind of surprising this never got an official release for one reason or another; it’s a really interesting, unusual and highly addictive game with a ton of personality to it!

The “Freescape” games released by Incentive Software were all rather interesting for a variety of reasons.

Most notably, they represented some of the earliest examples of a multi-purpose, cross-platform 3D engine at work — Freescape was so flexible that it would run on everything from the ZX Spectrum up to Atari ST, Amiga and MS-DOS PC, though obviously with some limitations on the less powerful platforms!

Castle Master was one of the last Freescape games to be released on 16-bit platforms, and it’s also one of the most mysterious and intriguing. Let’s go for a little explore, shall we?

Nostalgia is a funny old thing. Since starting this project, I’ve found myself really appreciating some of the games that, for one reason or another, had an impact on me growing up. Not necessarily the best games, but those which have some sort of meaning to me.

One of my favourite examples to date is today’s game: Winnie the Pooh in the Hundred Acre Wood, an early title from Sierra during their partnership with Disney. As well as being a game I loved playing with my family as a child and possibly one of the most charming, kid-friendly adventures of all time, it’s an interesting game from a historical perspective, too, since it’s one of the earliest titles Al Lowe put out.

Al Lowe, if you’re unfamiliar with your Sierra history, is the man who would later give us the Leisure Suit Larry series, a mainstay of Sierra’s portfolio alongside King’s Quest, Space Quest and Police Quest for many years… but a little different in subject matter to what we have here!

I love it when game developers get creative. This is not an altogether unusual sight these days, of course, but back in the early to mid ’80s, it was always a real treat to see someone step outside of genre “norms”.

Such was the case with Time Bandit by Bill Dunlevy and Harry Lafnear, a top-down action adventure with elements of text adventures, role-playing games, Pac-Man and all manner of other goodness. While superficially resembling Gauntlet — which actually came out after Time Bandit was fully developed — there’s a hell of a lot of depth here, and some fiendish puzzles to unravel.

If you want a game that pretty much sums up what the Atari ST gaming experience is all about, you can do far worse than give Time Bandit the, uh, time of day.

This is a site about Atari 8-bit and ST computers, their games and their software, written and curated by Pete Davison.

Atari A to Z
Powered by WordPress.com.